Three of us celebrated the break in our drought by heading with our boats to the Medina River.  Yes, I played hooky from the office.  The motivating factor was that the river was running between 275 cfs (as measured by the gauge at the Patterson Ave. crossing in Medina) and almost 400 cfs (according to the gauge in Bandera).  These compared to readings of less than 5 cfs at both gauges just eight days earlier.

We launched our two kayaks and one canoe at the roadside park on Hwy. 16 at Ranger Crossing.  Our journey ended only 5.5 miles downstream at Bandera City Park. 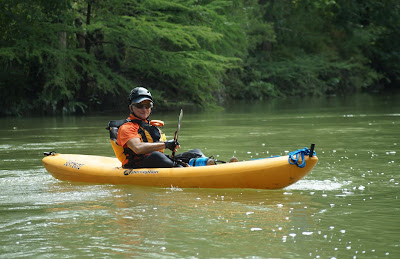 Gary leads the way shortly after our launch. 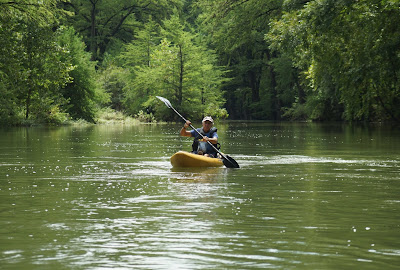 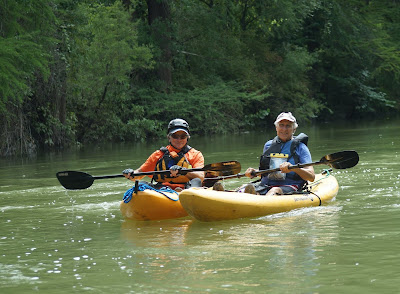 We stopped for lunch at the dam just upstream of Schmidtke Road in Bandera.  Our snacks were augmented by frozen margaritas. 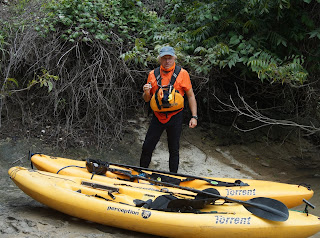 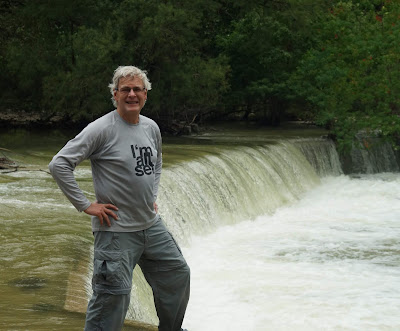 Appropriately nourished, we paddled the short distance to our takeout at the City Park. 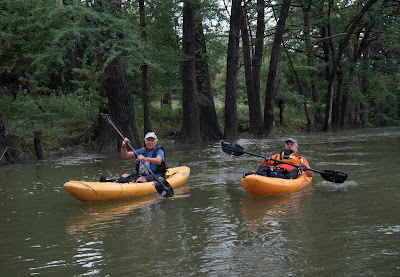 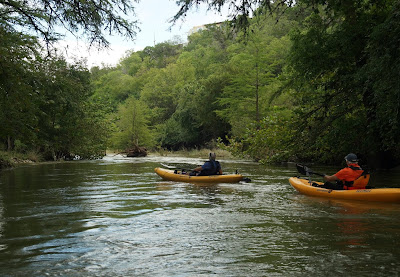 Although the paddling ended up being less exciting than we had anticipated, it was great just being on the river again. 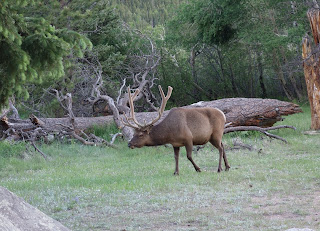 An elk (Cervus canadensis) grazes in Rocky Mountain National Park on the first day of our June trip to Colorado. 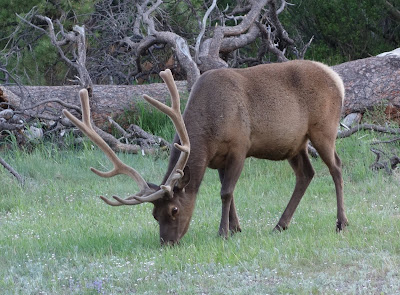 I'm guessing that this mature bull is about eight years old, based on the number of tines in his antlers. 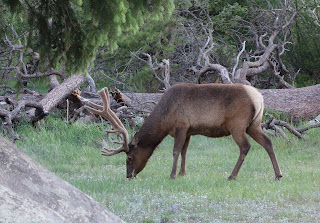 The Shawnee name for this magnificent animal is "Wapiti," which means "white rump." 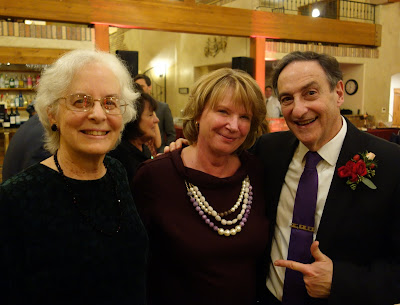 Kathy and our friend Amy pose for a snapshot with Ira Flato, the host of NPR's Science Friday.  We were attending the Estes Park wedding of David and Louise Eisenhauer's daughter Laura to Ira's son Sam on January 15.

Posted by Henry Amen at 5:00 AM No comments:


Goosenecks of the San Juan River

On our way to Cedar Mesa in southern Utah in April, Mike Scudday and I made a brief stop at Goosenecks State Park.  We arrived there early in the evening.  The panoramic photo above shows the major portion of the twists and turns of the San Juan River which can be viewed from the park.  If you click on the photo, you should get a better look at the amazing scenery.  On the horizon in the center of the photo, you can barely spot a few Monument Valley rock formations. 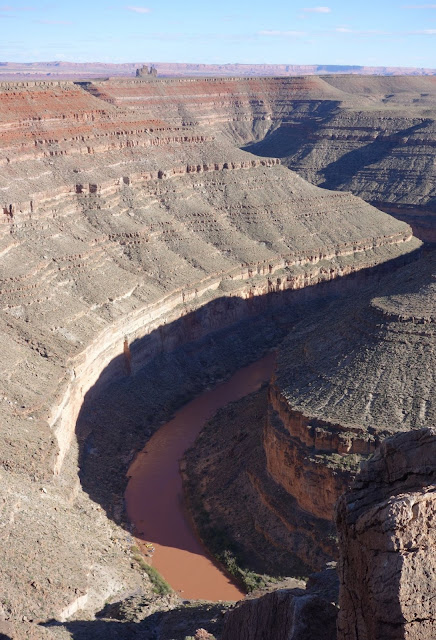 Looking down to the river, we could see that a party with what appeared to be three rafts and an inflatable kayak had pulled over on a sandy bank to pitch their tents and set up camp for the night.  You can spot them at the edge of the sunlight on the river. 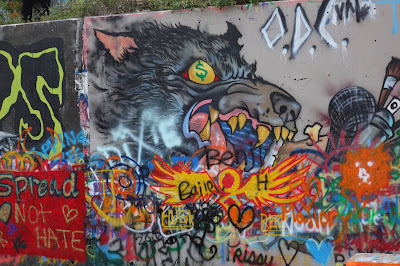 Some more photos from the Graffiti Park last weekend 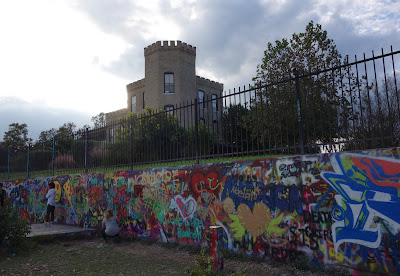 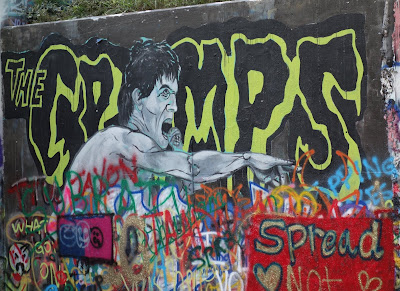 Posted by Henry Amen at 1:46 PM No comments: 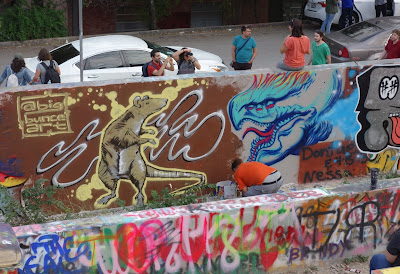 These photos were taken this past weekend at the Graffiti Park at Castle Hill, which is officially known as the HOPE Outdoor Gallery. 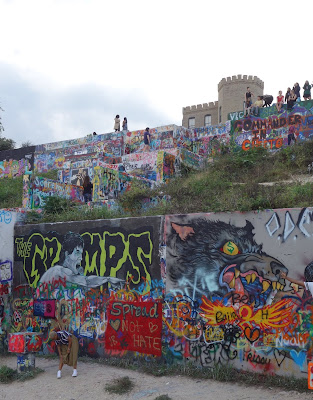 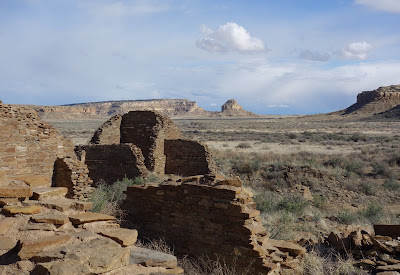 As noted in my previous post, Mike Scudday and I made a quick overnight visit to Chaco Culture National Historic Park on our way to Utah this past spring.  In recognition of its rich archeological resources, the park was designated as a UNESCO World Heritage Site in 1987.  The park's significance is based on its approximately 4,000 prehistoric and historic archaeological sites, representing more than 10,000 years of human cultural history in Chaco Canyon.  Among these are Chaco “great houses” -- the largest, best preserved, and most complex prehistoric architectural structures in North America.  Sixteen great houses are interpreted within the park.  In addition, Chaco Canyon was the center of a regional system of communities.  These were linked by prehistoric road and trade networks throughout the San Juan Basin. 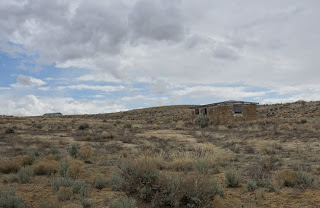 The park is accessed from US 550 via 8 miles of paved road followed by 13 miles of dirt road passing through BLM and Navajo lands.  Fortunately, the Bundy clan was nowhere to be seen. 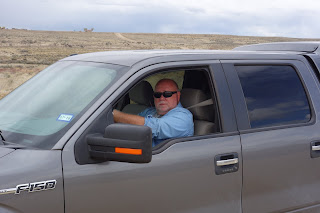 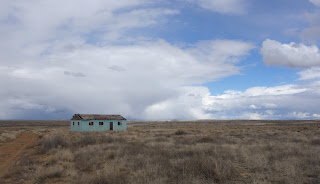 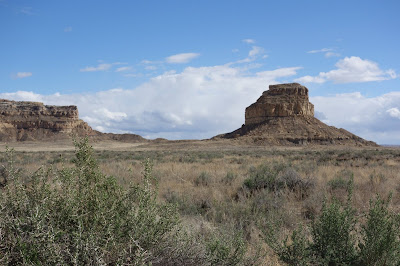 As we entered the park around mid-afternoon, we were greeted by Fajada Butte, which reaches an elevation of 6,623 feet.  After checking in at the park headquarters and obtaining a campsite, we headed out to explore some of the archeological sites. 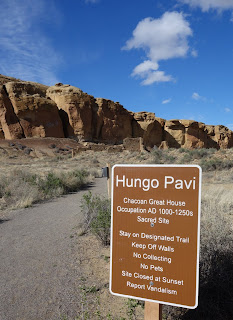 The first site we explored was Hungo Pavi.  This is an unex- cavated Chacoan great house containing over 150 rooms, a great kiva, and an enclosed plaza.  It is located at the mouth of Mockingbird Canyon.  The north roomblock includes three rows of rooms and stood at least three stories tall along the rear wall, dropping to a single story along the plaza. Construction occurred in two primary periods, the first between the late 900s and the early 1000s. The second building episode is dated to the mid-11th century, and added the eastern and western wings, upper stories to the main roomblock, and the row of rooms on the south side that enclosed the plaza. 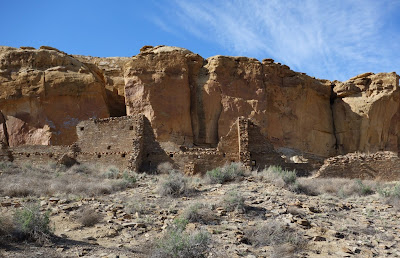 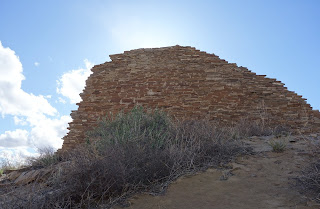 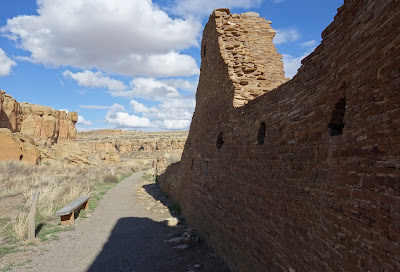 The back (north) wall of the great house.  It would have been three stories tall at the time the canyon was abandoned by the ancient ones. 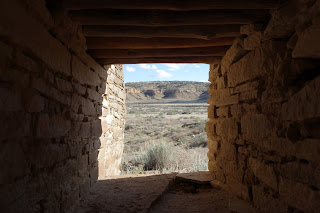 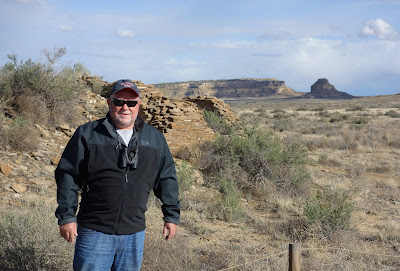 Tour guide Mike at the site, with Fajada Butte in the background. 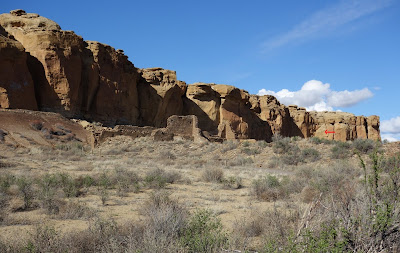 Chacoans carved a wide, steep stairway into the cliff face behind and to the right (east) of the great house, as indicated by the crudely-drawn red arrow in the photo above (and seen more clearly if you click on the photo).  These steps provided access from the canyon floor to the mesa top, where they connected with an elaborate prehistoric road system.

Coming attractions:  In future posts, I will cover another great house, Chetro Ketl, and then the spectacular Pueblo Bonito.  So stay tuned.

Posted by Henry Amen at 9:02 PM No comments: